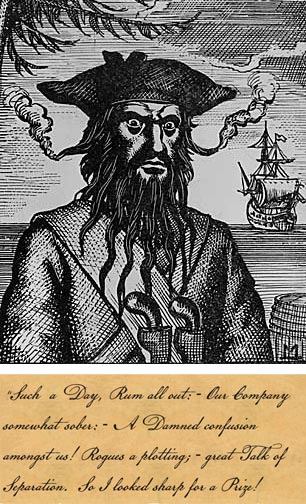 Edward Teach, alias Blackbeard, has become one of the most infamous pirates in history. Most of the so-called histories of the man are in fact based on legends, rumors, and many unsubstantiated accounts. Blackbeard’s career only lasted two years during which there are some newspaper accounts of his exploits and some other archival documents that relate his adventures. The only other source is a book written in 1724 by a Captain Charles Johnson. His book, A General History of the Pirates, included detailed accounts of the most notable pirates of the early eighteenth century.

Blackbeard was a master at promoting his public image as a fearless brute. He knew that striking terror into his victims was as useful as an extra row of cannons on his flagship. There is no record that he killed or tortured anyone but he maintained a fearsome presence. He was described as a “tall spare man with a very black beard which he wore very long.” In battle or when taking a prize, he would hang lighted fuses from under his hat. His thick beard that “covered his whole face up to his eyes” was braided with ribbons and he used his exceptional height to a psychological advantage. He armed himself with six pistols, knives, and a cutlass. He need only raise the black flag and show himself to wary merchant captains. They would surrender without a shot. Mostly they were let go to warn others not to resist if they were to be confronted by Blackbeard. Most of his prizes produced little in gold and silver. He scored a number of vessels that merely carried flour and other supplies necessary to maintain his growing pirate crew. He never captured a richly laden Spanish ship.

“In the commonwealth of pirates, he who goes the greatest length for wickedness is looked upon with a kind of envy amongst them, as a person of more extraordinary gallantry, and is thereby entitled to be distinguished by some post, and if such a one has but courage, he must certainly be a great man. The hero of whom we are writing [Blackbeard] was thoroughly accomplished this way, and some of his frolics of wickedness, were so extravagant, as if he aimed at making his men believe he was a devil incarnate…”

Ocracoke Inlet, North Carolina. Blackbeard was killed here in 1718. In 1750, the Lloyd brothers stole a huge treasure belonging to the Spanish galleon, Nuestra Señora de Guadalupe. This piracy exceeded anything the bearded brute ever did.

His air of intimidation extended to his own crew. Just before he was killed at Ocracoke, Blackbeard had sat down to some drinking with some of his crew. He secretly pulled out two pistols under the table, blew out the candle, crossed the pistols and fired, hitting his master, Israel Hands, in the knee and maimed him for life. When asked why he did it his response was to say that if he did not now and then kill one of them, they would forget who he was. That wound may have been responsible for Hands being ashore at Bath when Blackbeard was killed. He was later pardoned. Had he been hanged or killed with Blackbeard, Robert Louis Stevenson would probably not have borrowed his character for Treasure Island. He was killed by Jim Hawkins at Treasure Island.

Johnson says that he had fourteen wives, the last was a girl of sixteen he married in North Carolina. It is hard to say how much of this is true because Johnson is the only source for this. In 1717, Governor John Hamilton of Antigua stated that he had a wife and children in London.

Blackbeard was so successful in perfecting his image of a fearsome pirate that he has become known in modern times as one of the most successful pirates of his time when in fact others like Bartholomew Roberts and Edward Low exceeded him in plunder and barbarity.

As for his treasure, if any, Blackbeard proclaimed “That no-body but himself and the Devil, knew where it was, and the longest liver should take all.”

Blackbeard was killed on November 17, 1718, at Ocracoke Inlet, North Carolina, at his anchorage now known as Teach’s Hole. Thirty-two years later at this same location, Owen Lloyd would succeed in stealing 52 chests of treasure from a Spanish galleon, thus inspiring one of the greatest adventure stories of all time, Treasure Island.