North Carolina’s involvement in the true story of Treasure Island began when the Spanish galleon, Nuestra Senora de Guadalupe arrived heavily damaged at Ocracoke Inlet and in need of help. Owen and John Lloyd offered their services and towed the galleon through the treacherous shoals of the inlet. From that point on, numerous towns that rim the Pamlico and Albemarle sounds found a role in the history of Treasure Island.

New Bern. New Bern is located on the Neuse River which feeds into Pamlico Sound. It was the capital of the North Carolina Colony at the time the Spanish arrived at Ocracoke. Captain Juan Manuel Bonilla was summoned to New Bern by Governor Gabriel Johnston in order to offer protection to the Spanish for their ship and her cargo of treasure. New Bern was also the home of Abraham Pritchett, the nineteen year old first mate of the Seaflower who joined in with Owen Lloyd when he stole the treasure. The crew from the Nuestra de Soledad wrecked above Cape Lookout were taken to New Bern and some of the crew mutinied and were locked in the jail there. Later, when some of Bonilla’s treasure was removed from HMS Scorpion before departing Wilmington on the Cape Fear River, he returned to New Bern to protest to the governor as it was done on his order. The governor then threw him in jail for a month. Upon his release he travelled to Edenton where the home of Governor Gabriel Johnston was located.

Edenton. Located on the northwestern end of Albemarle Sound, it was the second Colonial capital of North Carolina from 1722 to 1743. Captain Bonilla visited Governor Johnston there in an attempt to get his 12,000 pieces of eight back. Governor Johnston instructed him to go to Suffolk, Virginia, where his insurance agents had a correspondent. His galleon was eventually towed there for repairs.

Pasquotank County (Elizabeth City). It was here that William Blackstock lived, the one-eyed Scotsman that assisted in stealing the Guadalupe’s treasure. He boarded and forced his way on the Seaflower which was loaded with fifty chests of silver and other cargo. He returned to Pasquotank after he was captured in the Virgin Islands. He operated a tavern at Turkey Buzzard Ridge and owned 255 acres at head of Indian Creek running into Great Flatty Creek.

On May 2, 1750, a John Lloyd had purchased 150 acres on the west side of Arenuse Creek on the Pasquotank River opposite Elizabeth City. This same Lloyd then sold the land on August 18, 1752, two years to the day the Spanish fleet left Havana, which was recorded November 29, 1753. In the deed were two startling revelations. The first was that John Lloyd was described as a captain formerly of Norfolk, Virginia. The second and most important, was this statement:

“The true intent that James Montier do pay and cause to be paid twenty pounds lawful money of Great Britain in the hands of Mr. George Keith merchant in London at or upon the arrival of the aforesaid John Lloyd in London and within eighteen months from date hereof then this indenture to be void but if fault be made in payment of twenty pounds to the said Lloyd when he arrives in London…” 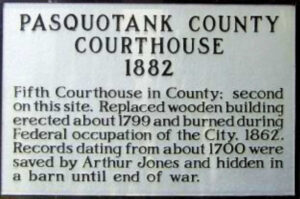 This priceless tidbit placed John Lloyd in London in proximity to the time of the one-legged John Lloyd checking into the Naval Hospital in Greenwich in April 1753. The historical marker outside told the rest of the story. The land records had been saved in a barn during the Civil War when the Federal troops invaded Elizabeth City and burned the courthouse in 1862. Had these records not survived, this invaluable link that bridged the gap between records found in London and those in Virginia would never have been found. Today, the land formerly owned by John Lloyd is called Treasure Point (now in Camden County).

Brunswick–Wilmington Located on the Cape Fear River. It was here that HMS Scorpion stopped at with her load of treasure that had been recovered from the sloop stolen by John Lloyd. Bonilla was instructed to board the Scorpion for the journey to Wilmington from Ocracoke Inlet. On November 22, the Scorpion anchored off Brunswick in the Cape Fear River and commenced the loading of water and supplies and conducting routine maintenance in preparation for their transatlantic voyage. Bonilla was surprised to find Thomas Child, The king’s Attorney General for North Carolina, and Colonel Innes waiting for him. He boarded the Scorpion and presented orders from Governor Johnston in New Bern that they were there to collect a ten percent duty for all of the treasure on board as well as the other items that had been sent to Virginia. Bonilla protested.

On December 16, 1750, Captain Randal hoisted a flag to signal that they were ready to sail. The next morning, in the midst of gale winds and rain, Colonel Innes rowed out to the warship with some armed guards carrying Johnston’s latest demand. He wanted four and one-half percent for not only what was on board the Scorpion but also what had been sent to Virginia. After reviewing the orders, Captain Randal gave permission for Innes to send the four slaves he had brought along to go into the hold. Each one hauled out a heavy chest of silver putting it into Innes’s boat. Bonilla protested to no avail and could do nothing more than watch as the 12,000 pieces of eight headed for shore. At Brunswick, the chests of silver were turned over to Thomas Child, who departed for New Bern to meet with the eagerly awaiting governor. Bonilla then set out for Wilmington where he stayed before going to New Bern to confront Governor Johnston which landed the unfortunate Spaniard in jail. Bonilla never recovered his money.

Bath The first port of entry in North Carolina. Reputed to be the haunt of Blackbeard. Captain Zebulon Wade, who owned the Seaflower, which carried the treasure to Norman Island, was from Scituate, Massachusetts. But, after the death of his wife Mercy and his son Zeb, he died a broken man in 1754 at Bath, North Carolina. He never knew that his run in with Owen Lloyd and a galleon’s treasure would be the future inspiration for Treasure Island.