Also known as St. Christopher’s, is located 130 miles southeast of the British Virgin Islands. This beautiful island was considered the crown jewel of the Caribbean by the English and also called the Mother of the Antilles. St. Kitts was Owen Lloyd’s ultimate destination. It was here that his wife, Christian, was living with her brother, Charles Caines, on the family plantation at Dieppe Bay at the north end of the island. This island became the epicenter for the search for remaining treasure in the Caribbean and the apprehension of Owen Lloyd. It was here that Lt. General Gilbert Fleming, the acting governor of the Leeward Islands, and the attorney general, John Baker, lived. Fleming oversaw the effort to recover and return the treasure to the Spaniards. Basseterre, St. Kitts, is also the burial place for the great grandfather of Robert Louis Stevenson. 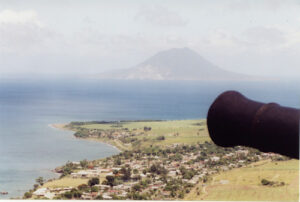 View of St. Eustatius from fort at Brimstone Hill

The London Magazine of February 1751, distributed throughout England and the American colonies, featured an article entitled “Spanish Treasure Embezzled.” It was actually a letter that had been written from St. Kitts to the magazine dated December 16, 1750. The letter stated that Captain Lloyd was “now in chains at St. Eustatius” for stealing money that belonged to “the Viceroy of Mexico.” It also stated that “it is imagined that Lloyd has murdered some Spaniards, and run away with the treasure.” Fifty-two chests of treasure were said to be buried at Norman Island but were later recovered by the people of Tortola. It said that at St. Kitts, coins minted in 1749 and 1750, part of Lloyd’s loot, were being passed in the course of daily commerce. Lloyd had to have already been well known throughout the island by most of the plantation owners because of his capture of the French slave ship. Over 300 slaves had been sold and dispersed around the island. And now, newly minted pieces of eight were circulating around St. Kitts thanks to Owen LLoyd. 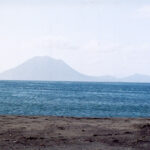 St. Eustatius as seen from the beach of the Caines Plantation

When Owen Lloyd arrived here from St. Thomas, his wife, Christian, came out to meet him at the familt plantation. She told him that they knew what he did and that he was a wanted man, She told him that he could not stay because of the scandal and that he was in danger of being captured. Owen calmly pointed across the water to the Dutch island of St. Eustatius and said he would go there where he would be safe as the island was considered an open port and did not respect foreighn trede laws. So, he, Zebulon Wade, Abraham Pritchett, forteen year old Thomas Hobson, and twp others sailed over to St. Eustatius and anchored in the harbor. Lloyd didn’t realize that news of his theft at North Carolina had preceded his arrival and the greedy governor, Johanes Heiliger, wanted the treasure for himself. 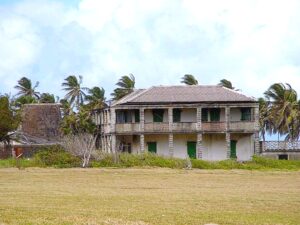 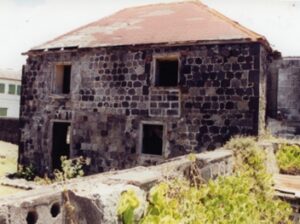 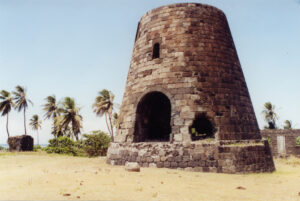 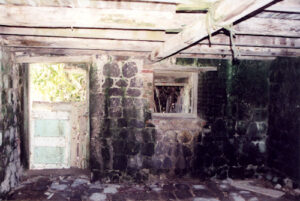 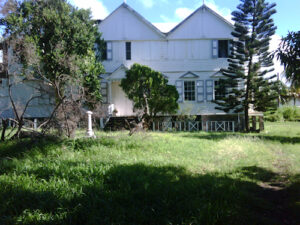 Shadwell House The home of Lt. General the Leeward Islands

Lt. General Gilbert Fleming was in charge of the Leeward Islands which included St. Kitts and the British Virgin Islands. His residence was at Shadwell on the edge of Basseterre Town. Fleming had been to Tortola to confiscate the treasure from the inhabitants and if possible to capture Owen Lloyd, the son-in-law of his personel friend, Charles Caines at Dieppe Bay.

Fleming had several estates on St. Kitts. Besides Shadwell he own another sugar plantataion at the south end of the island. 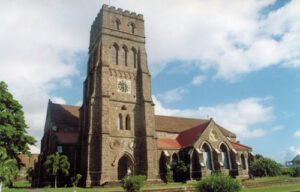 In 1772, Alan Stevenson arrived at St. Kitts from Scotland to work in his uncle’s sugar business. Alan is the great great grandfather of Robert Louis Stevenson. He died in 1774 at the age 24 at St. Kitts. He had contracted a fever while pursueing a person around the Caribbean with his brother, Hugh, who died at Tobago. Alan left one son named Robert who grew up in Scotland and heard a few tales from his mother about his father’s adventures. Alan was burried in the churchyard of St. George’s church in Basseterre. Elizabeth Lloyd, the wife of John LLoyd was buried here in 1759. It was Robert Louis Stevenson’s father, Thomas, who not only inspired parts of Treasure Island, but helped his son draw the map of Treasure Island which is probably the most famous treasure map in the world. Robert Louis Stevenson was born on in Edinborogh, Scotland on November 13, 1750, exactly one hundred years after Owen LLoyd buried his loot on the real treasure island on November 13, 1750.

Tortola. Located six miles north of Norman Island in the British Virgin Islands. It was here that officials attempted to recover the treasure buried at Norman Island. Within days of Owen Lloyd’s departure, many of the inhabitants of Tortola had recovered most of the treasure. Later, in 1751, more treasure was discovered in the hands of the people of Tortola.

St. John. Located just west of Norman Island in the U.S. Virgin Islands. It was here that Lloyd stopped for supplies before he buried his treasure.

St. Thomas. Located in the U.S. Virgin Islands. In the late 17th and early 18th centuries, this island had the reputation for harboring thieves and pirates. At that time it was owned by Denmark, as was St. John and St. Croix. Governor Christian Suhm likewise gave Owen Lloyd asylum here until he met his untimely end.

St. Croix. Located south of St. Thomas and Norman Island in the U.S. Virgin Islands. Owen Lloyd stopped here on his way to St. Kitts after burying his treasure at Norman Island. It is highly likely that Lloyd secreted some of the stolen treasure on this island.

Anguilla. A small low lying island with beautiful beaches. Some of the treasure was taken here by William Blackstock, a one-eyed Scotsman who forced his way onto Lloyd’s sloop at Ocracoke, North Carolina. The treasure was seized by the governor, Benjamin Gumbs.