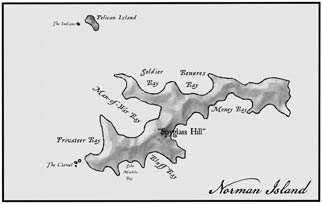 Owen Lloyd fled Ocracoke on October 20, 1750. His brother, John, was captured before he could clear the inlet. After twenty days of sluggish sailing, he arrived at St. John’ s in the Virgin Islands and purchased supplies. He then turned Norman’s Island five miles to the east. He was desperate to get rid of the one-eyed Scotsman named William Blackstock and his allies, William Dames from Maryland and Charles McClaire from North Carolina.

As soon as they came to anchor off Norman’s (as it was known then), the crew brought the cargo up on deck so that it could be divided up. To their amazement placed on deck:

The total take was valued at nearly 250,000 pieces of eight. Lloyd had promised his crew early on that the treasure would be divided equally which included fourteen-year-old Thomas Hobson. He did this to prevent any uprising by Blackstock and his faction. To get Blackstock off the sloop he had to carry through with his promises, so he put Blackstock, Dames, and McClair ashore with their chests of silver and bales of cochineal. 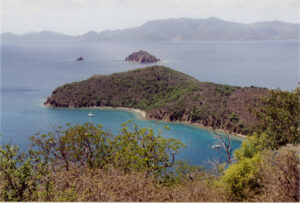 Norman Island with the Bight below and Tortola in background

While the Seaflower lay at anchor, a small craft called a coble was rowing towards them from Tortola. Thomas Wallis had observed the sloop for the past two days and was suspicious that some trading violation may be taking place. He pulled up alongside the Seaflower and asked what was their business. Lloyd, quick to answer, declared that they had just completed repairs for a leak and would soon be on their way. This seemed to satisfy Wallis who proceeded to return to Tortola when the Seaflower raised her anchor.

As Lloyd made for St. Thomas, Wallis’ curiosity persuaded him to enter the bay and take a look. Blackstock saw him approaching and waved him in. Blackstock boarded and Wallis took him over to Tortola leaving Dames and McClair behind. On the way, Blackstock gave him the assumed name of William Davidson and confessed to salvaging a wreck in North Carolina and hiding the loot on Norman’s Island.

Wallis took Blackstock to the home of Abraham Chalwell where he confessed to the theft as William Davidson and blamed the entire episode on Owen and John Lloyd. Chalwell immediately went over to Tortola to find the treasure. Here, he also discovered William Dames and Charles McClair who made their own disclosures of their shares.

Soon, all of Tortola was abuzz with story of buried treasure. Anybody with a boat travelled the six miles and even brought their slaves to comb the island.

News was sent to Gilbert Fleming at Antigua, the Lt. General of the Leeward Islands. By now he had heard of Owen Lloyd’s theft. In fact, he already knew Owen Lloyd as he was married to Christian Caines, daughter of Charles Caines, a prominent plantation at St. Kitts where Fleming also maintained several plantations.

Fleming arrived at Tortola and took custody of Blackstock who confessed his real name and related the entire event to Fleming. Fleming sent soldiers to Tortola in the hopes of finding more treasure.

A number of successful treasure finders at Tortola were interrogated and were convinced to turn over what hey had found. Blackstock was let go and Fleming returned to Antigua with a majority of the treasure that had been recovered which was ultimately returned to Captain Juan Manuel Bonilla’s agents in London.

Owen Lloyd arrived at St. Thomas for a short stay and then sailed for St. Kitts to meet his wife. His adventures were far from over. 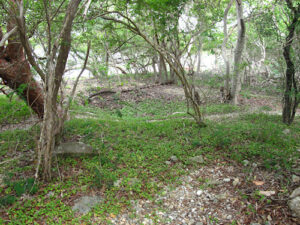 A noticeable depression in ground at Benures Bay

Since 1750, rumors of treasure finds have persisted. In 1835, the Norman Island Treasure Company was formed to hunt treasure there. Little is known about this venture but it was most likely an effort to find some of the treasure buried by Owen Lloyd and his crew. Today, you can see unnatural depressions in some places on the island where digging has taken place. On the south side of the island facing St. Croix is cove called “Money Bay.” The origin is uncertain, but it dates back to maps of the early 1800s. Soldier Bay and Privateer Bay are certainly names reminiscent of past pirate activities, if not the specific events of 1750. 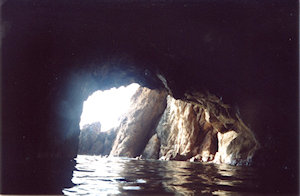 In the late 1800s, treasure was reputed to have been recovered here.

Treasure Point at the southern point of Man O’ War Bay most likely got its name from a cluster of caves that face westward towards St. John. It was in one of these caves that another story of hidden treasure has been documented. The event supposedly took place in the 1850s but was recorded in the June 22, 1889, issue of The Daily Light of San Antonio, Texas:

“One morning about thirty years ago a fisherman of one of the Virgin Islands arrived at Road Town, Tortola, the capital, with a story that a large schooner was anchored off the coast of Norman’s Island and that her boats were moving along the shore. The island being uninhabited there could be no question of smuggling; nevertheless, the circumstance was so extraordinary that an expedition was at once organized to investigate.

The old fisherman took the exploring party to his own settlement nearby, and there they were furnished with boats, torches, etc, and thus equipped they made sail once more for Norman’s Island. They entered the cavern despite the protests of thousands of bats that rushed around the torches. On either side was a narrow sandy beach sloped from the perpendicular walls, leaving a channel of more or less uniform width, in which the boat could with difficulty be turned. After a search of half an hour or so, the explorers came to a spot where the solid wall of the cavern had only recently been attacked with a pick. The pick itself lay prone on the pile of debris that littered the beach below.

On closer investigation, the debris was found to consist of mason work, and to have formed the walling up of a vaulted chamber sunk into the rock, about four feet square. Scattered about among the fragments were found a few pieces of Spanish gold and silver coin and a jeweled sword hilt, together with a sheet of paper, on which were written explicit instructions for the finding of the vault, in which it was stated that a vast quantity of treasure had been stored away by Captain Kidd and some of his companions.”

This author, having been in the caves numerous times, can find no credibility to this tale but there is a tale that dynamite was used to open up the cave many years ago. 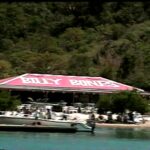 Billy Bones was the first restuarant on Norman Island

The Bight, formerly known as Man O’ War Bay is one of the best anchorages in the British Virgin Islands. 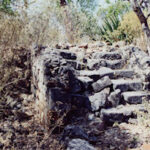 Early habitation gave a commanding view of Tortola to the east

Within its protected basin, Pirates Bight restaurant and Bar is a must stopover. It was originally known as Billy Bones after the character in Treasure Island. Anchored nearby is the infamous Willie T. a floating bar and restaurant named after William Thornton who was born on Jost Van Dyke in 1759.

On top of the ridge, east of the restaurant are ruins that date to at least the early 1800s. The base is brick and stone which supported a thatch structure for habitation which is no longer evident. Reminiscent of the stockade in Treasure Island, these ruins have a gun port for a cannon and loopholes to accommodate musket fire. 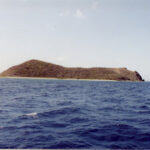 There are other “coincidences” with Treasure Island. Four and a half miles to the Northeast is a small uninhabited island called Dead Chest. Stevenson included his famous sea chanty, “Fifteen men on the Dead Man’s Chest, Yo-Ho-Ho and a bottle of rum!” in his book. No doubt a direct link to this little island. 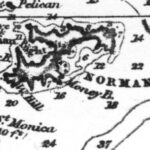 Money Bay is noted in middle of south side

On the south side of Norman is a bay called “Money Bay.” Today’s Money Bay seems to be different from the earliest maps. 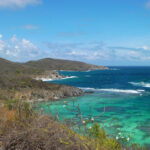 The South side of Norman Island

There are three bays on the south side of Norman Island. Money Bay most likely did not get its name from  1750 as the treasure was not buried on this side of the island. Most likely came from a shipwreck dashed onto the this rocky shore.

In 2017, this author captured the attention of The Travel Channel who sent him to Norman Island with Phillipe Cousteau to film the episode “The Real Treasure Island.” (Episode 7, Season 1, Caribbean Pirate Treasure). We found nothing of course.