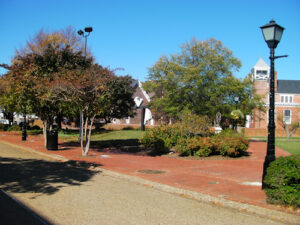 Orwen Lloyd, the man who planned and executed the heist of Spanish treasure at Ocracoke, lived on the north side of Queen Street in Hampton, Virginia, within a hundred yards of St. John’s Church which was in existence in 1750.

Hampton, Virginia, is the oldest continuous English settlement in the New World. It has its unique place in history. It can now lay claim to something else. Robert Louis Stevenson’s Treasure Island might not have been written except for the actions of one of its forgotten citizens, a merchant captain named Owen Lloyd who lived in Hampton in 1750. In 1749, Owen Lloyd bought his house on the north side of Queen St. within a hundred yards of St. John’s Episcopal Church. He and his wife Christian hoped to raise their children here while Owen ferried cargos of barrel staves and farm produce to St. Kitts where his brother-in-law, Charles Caines, ran a sugar plantation. He would return with cargoes of rum, molasses, and sugar which were sold in part to the taverns in Hampton and Norfolk. 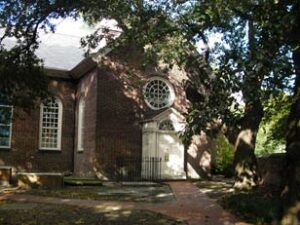 Both Owen Lloyd and his peg-legged brother John were married at the Borough Church, now known as St. Paul’s in Norfolk, Virginia. John lived nearby on Church St.

Owen had a one-legged brother named John who lived with his wife, Elizabeth, in a wood frame tenement on the west side of Church Street, now St. Paul’s, in Norfolk. He was a familiar character around the taverns and docks of Hampton Roads as he hobbled about on his wooden leg. He had lost his left leg in the late King George’s War with Spain.

The south end of King Street in Hampton, Virginia. The notorious tavern of Mrs. Ann Hawkins was located here at the NW corner of King Street and Rudd Lane. It is the same location that was later known as the Bunch of Grapes. 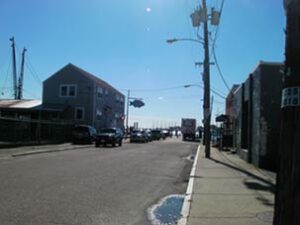 Owen had gotten into financial hardship by 1750 because of his losses in the war which had formally ended the year before. His wife, Christian, had returned to St. Kitts in the summer of 1750 because of all of his setbacks. On September 8th, Owen and John sailed from Hampton for St. Kitts, but unfortunately their sloop sprung a leak and they were forced to divert to Ocracoke Inlet, North Carolina, where the sloop sank. Fortunately, they made it safely to shore.

Here they discovered that a richly laden and disabled Spanish galleon called the Nuestra Senora de Guadalupe was anchored fifteen miles south of the inlet. Owen was hired to tow the galleon to safety. Weeks later, the treasure was offloaded onto two English sloops that were to take the treasure to Norfolk. Owen and his brother, John, developed a plan with the sloop captains to sail away with the treasure. On October 20, 1750, the sloops raised their sails and made for the Atlantic Ocean. John was caught after grounding on a sand bar but later escaped. Owen and his crew sailed to Norman Island in the British Virgin Islands where they divided up fifty-two chests of Spanish treasure. One hundred and thirty-one years later, Robert Louis Stevenson wrote a fictional story about returning to that island.

The drama in Hampton Roads did not end here. Captain Juan Manuel Bonilla had his disabled galleon towed into the Nansemond River and moored at the end of Main Street in Suffolk. While the ship was being repaired, 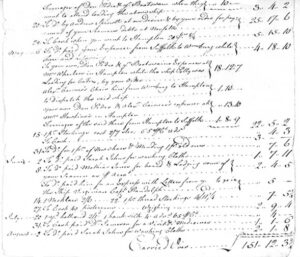 Part of the expense account of Juan Manuel Bonilla, captain of the Spanish galleon, Nuestra Señora de Guadalupe. This document  found in the Danish National Archives records his expenses at Mrs. Hawkins’ tavern and details his time in the Hampton Roads area. Courtesy of the archive.

Bonilla and his skeleton crew remained with the ship and visited Hampton, Norfolk, and Williamsburg. Bonilla hired an attorney from Nansemond County named John Watson to go to the West Indies to recover the treasure which had fallen into the hands of several enterprising governors. The expense account of Bonilla and his representatives while they were in Hampton Roads was found in the Danish National Archives. The document shows that Bonilla and John Watson were entertained at the tavern of Mrs. Ann Hawkins in Hampton and stayed at the inn of Janet Wheeler nearby.

Bonilla returned to Spain in December 1751. His galleon sailed into the harbor of Cádiz, Spain, in February of 1753, the only survivor of the fleet that left Havana, Cuba, on August 18, 1750. 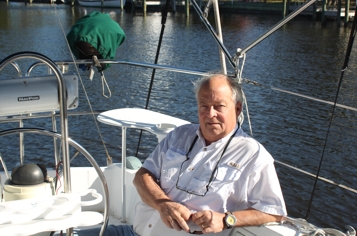 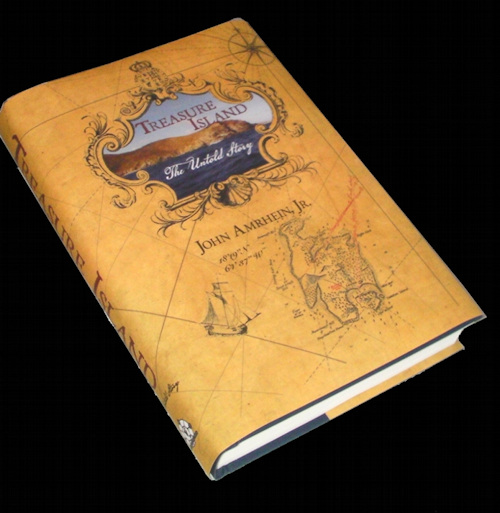 In 2012, Treasure Island won the IPPY Bronze medal for World History and bronze in the IBPA Ben Franklin Non Fiction cover design. It is only available now on Kindle, Nook, iBooks, and Kobo.

There is more to this 1750 story! The escort galleon with the Guadalupe ran ashore on Assateague Island, Virginia. The wild horses that roam there today are said to come from this shipwreck! 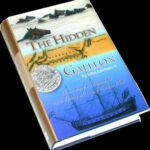