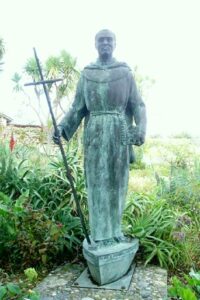 On August 31, 1749, the Spanish galleon, Nuestra Señora de Guadalupe, owned by Captain Juan Manuel Bonilla set sail for Vera Cruz, Mexico. She was carrying European goods that would be exchanged for a king’s ransom in treasure. Also on board were twenty Franciscan priests, one of whom was Father Junípero Serra.

Statue of Father Junípero Serra at the Carmel mission. Without the miracle delivered on the feast day of St. Barbara, the Guadalupe would have been lost and Treasure Island may not have been written.

On December 1, 1749, the Guadalupe was lumbering before the wind when the lookout spotted the mountain behind Veracruz, then smoke from the lime kilns south of the city. Hearing the lookout’s cry, those not already on deck rushed to get their first glimpse of the fabled city. Soon, the spires of the cathedral and the Convent of San Francisco came into view, followed by the fortress of San Juan de Ulúa and the stone walls that fortified the city. Suddenly, a storm blew in from the north forcing Bonilla to fall off the wind and head for Campeche.

Before reaching the safety of that port, the Guadalupe was caught in yet another storm on December 3. For two days, the ship was dashed about by towering waves. It was so horrific that on the following day the crew mutinied and demanded that Bonilla run the ship ashore to save themselves. The pumps could no longer keep up with the water and everyone despaired except one thirty-six-year-old, short, swarthy priest with black eyes and a scarce beard named Father Junípero Serra. He had remained calm throughout the storms.

The priests elected to pick a patron saint to ask for deliverance. Being December 4, they chose St. Barbara as it was her feast day. In unison they prayed, “Long live Santa Barbara.” The storm ceased immediately, the winds and seas calmed, and two days later, the Guadalupe arrived safely in the harbor of Veracruz. The priests walked to the Convento de San Francisco just inside the gate across the street from the customs house where they would rest before their overland journey to Mexico City. In order to fulfill their vows to St. Barbara made days before, Father Serra held a solemn celebration in her honor. He preached and gave everyone a detailed account of the voyage and their miraculous deliverance.

Father Serra later became known as the Apostle of California. He had established nine mission churches along the coast of Southern California. In 1770, he founded his second mission at Carmel which was named after St. Charles Borremeo. This became Father Serra’s favorite mission where he spent the last fourteen years of his life. In 1784, he died there and was buried beneath the sanctuary floor. 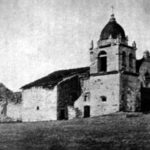 LEFT: The mission of St. Charles Borremeo in Carmel where Father Junípero Serra was buried in 1784. He was visited here in 1879 by Robert Louis Stevenson.

It was November 4, 1879, when Robert Louis Stevenson and his future brother-in-law, Adolpho Sanchez, shared an unusual outing. The two took a buggy ride from Monterey to the mission church of St. Charles Borroméo in Carmel. Once a year, on November 4th, Father Angelo Delfino Casanova traveled to Carmel from his parish in Monterey to say mass within the ruined walls of the mission, celebrating the feast day of San Carlos. The mass was followed by a gathering which not only included Catholics, but also Protestants, friends, and strangers alike. Everyone was welcome. Some of the aged Indians, remnants of Father Serra’s flock, would raise their voices in reverent song, reciting perfect Latin, which brought Stevenson to comment later, “There you may hear God served with perhaps more touching circumstances than any other temple under heaven…”

Stevenson was brought to tears, as he had never witnessed such reverence and devotion. It was later said that nothing interested him more deeply in Monterey than the old mission at Carmel. Stevenson learned that Father Casanova was trying to raise funds for the preservation of the mission, charging ten cents a person to those who came to visit.

When Stevenson was there, a new roof had been built over the sacristy but leaving the rest of the church to the open air. When Stevenson returned to Monterey, he wrote an editorial the following week in the Monterey Californian making an appeal for the restoration of Father Serra’s mission: “When I think how that bell first sounded from the Mission Church among the Indians of Carmello, and the echoes of the hills of Monterey first learned the accustomed note, I am moved, by sentiment, to pray for restitution or at least repair.” In 1882, after the confirmation was made of Father Serra’s remains in his burial vault, the restoration was well underway.

Today, Father Serra’s legacy is everywhere in southern California. Besides the numerous statues of him throughout that part of the state, there is also one in the Statuary Hall at the U.S. Capitol. No one knows of his historic bond with a Spanish galleon and buried treasure. The galleon Nuestra Señora de Guadalupe, captained by Juan Manuel Bonilla, was saved by a miracle without which the missions may never have been founded nor a treasure buried on a deserted Caribbean Island.