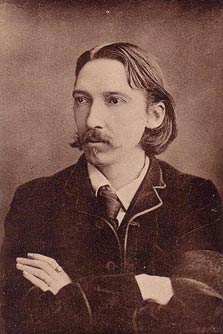 Robert Louis Stevenson was a Scottish novelist born on November 13, 1850, in Edinburgh, Scotland. He was an avid reader of history and aspired to become a writer. Until he wrote Treasure Island, he had only successfully completed short stories, poetry, and travelogues. RLS, as he is often called, was a sickly child and spent a great deal of time isolated from other children, often forced to entertain himself with his own imagination. As he grew older he became a disappointment to his parents because he refused to follow in the family business of lighthouse engineering. He always knew that he wanted to be a writer.

RLS’s life took an unpredictable road when he met an American woman in France named Fanny Osbourne. She had travelled there to study art with her young daughter Belle. She was also trying to put some distance between herself and her unfaithful husband, Sam Osbourne, who resided in San Francisco and worked as a court stenographer. For Stevenson, it was love at first sight when he saw Fanny, who happened to be ten years his senior. She also had a young son named Sammy. By the time Fanny was going to return to San Francisco, he had exacted a promise from her to divorce her husband.

Fanny did return to her husband, who attempted a reconciliation, but soon would revert to his philandering. Fanny telegrammed RLS in Scotland who immediately scraped together enough money to take a steamer to New York. He rode train after train across America, where he arrived in San Francisco in August of 1879. He then took another train to Monterey where Fanny had rented a house for herself and two children. During his travels and in Monterey, RLS was almost constantly ill, suffering from tuberculosis. In Monterey he nearly died several times. Stevenson fought back courageously, and when he ultimately married Fanny in May of 1880, he rebounded and then returned to Scotland with his new family.

In August of 1881, on a rainy day at the family vacation cottage, his twelve-year-old stepson drew a map of an island and asked RLS to join in. Stevenson drew in names and a location for buried treasure. His adoring stepson asked for a story about the island. Stevenson struggled for realism in his story, borrowing ideas from everywhere he could. Later, when Treasure Island was about to be published, he and his father noted on the map the date the treasure was buried. It was 1750, the same year that a notorious treasure was buried on Norman Island in the British Virgin Islands. The rest is history.